Here is an overview of the operators in Zend PHP 5 when studying for the certification. Some of these operators are commonly used in PHP and are essential to master.

Like with most programming languages, the basic arithmetic operators are as follows:

You can also use modulus (%) to calculate the remainder.

Note that you can also use the following:

What is a bit?

This is because both values share the bit in third position on place value 4.

This is because both values have bits set in the first, second, third and fourth positions.

Returns true when set bit of one expression is not set in another expression.

The symbol for assignment is “=”. This “sets” the left operand to the value on the right. It does not mean “is equal to” as the symbol suggests.

Assignment by reference means that both variables end up pointing at the same data, and nothing is copied anywhere.

The increment/decrement operators only affect numbers and strings 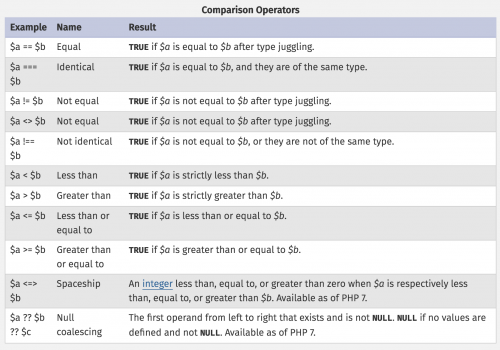 The spaceship operator is introduced in PHP 7. It:

The null coalescing operator has been added in PHP 7 as syntactic sugar for the common case of needing to use a ternary in conjunction with isset().

For the first example, the two values apple and banana are taken from $a and the third value cherry, which only exists in $b is taken from $b.

For the second example, the two values pear and strawberry are taken from $b and the third value cherry, which only exists in $b is also taken from $b

$a === $b Identity TRUE if $a and $b have the same key/value pairs in the same order and of the same types.

This requires that the keys are in the same order in both arrays.

instanceof is used to determine whether a PHP variable is an instantiated object of a certain class:

Backticks (“) is the one execution operator that PHP supports. PHP will attempt to execute the contents of the backticks as a shell command.

Use of the backtick operator is identical to shell_exec().

Note that the backtick operator is disabled when safe mode is enabled or if shell_exec() is disabled.