This post covers the Quoting section of the Strings chapter when studying for the Zend PHP 7 Certification.

A string literal can be specified in different ways.

A backslash example can be seen below.

Other examples include the following:

If you have a variable, $type, and you what to echo out echo "The $types are", that will look for the variable $types.

You could get around this by using echo "The {$type}s are". You can put the left brace before or after the dollar sign.

This is one of the most important features about double quotes – that variable names will be expanded.

Within double quotes, we can also interpret more escape sequences for special characters. 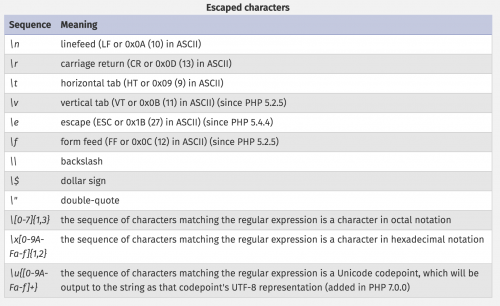 View the other sections:

Note: This article is based on PHP version 7.1.